Whether it’s your drink of choice every night out or you find the taste too strong for your preference, no one can deny how beer is a staple in every bar, club, or restaurant almost anywhere in the world. Unlike other alcoholic drinks, beer dates to ancient civilizations, possibly as early as 10,000 BC. Today, it’s still one of the top choices of millions of adults and is currently the third most popular drink, after water and tea.

When you’re cracking open a cold one, have you ever stopped to consider what it took to get a truckload of wheat or barley and turn it into a cold and refreshing can you have in your hands? The beer has an interesting history, one that has helped build it into a $485.2 billion global industry in 2014 and is set to grow up to $750 billion worldwide in 2022. All because we’ve kept the tradition of fermenting grains.

If you’re curious to know how beer came to be, why it comes in so many forms, and what the best way to enjoy a beer on a night out is, you’ve come to the right place. Learn more about what might be your favorite alcoholic drink here.

There’s evidence that beer is one of the world’s oldest prepared drinks. Archaeological evidence of fermentation points to beer existing 13,000 years ago in Israel. It’s recorded in Iraq and Egypt’s history as a key part of their economy: workers in ancient Iraq were paid with beer, while workers in Egypt building the Great Pyramids of Giza received daily rations of up to five liters of beer as both nutrition and refreshments. 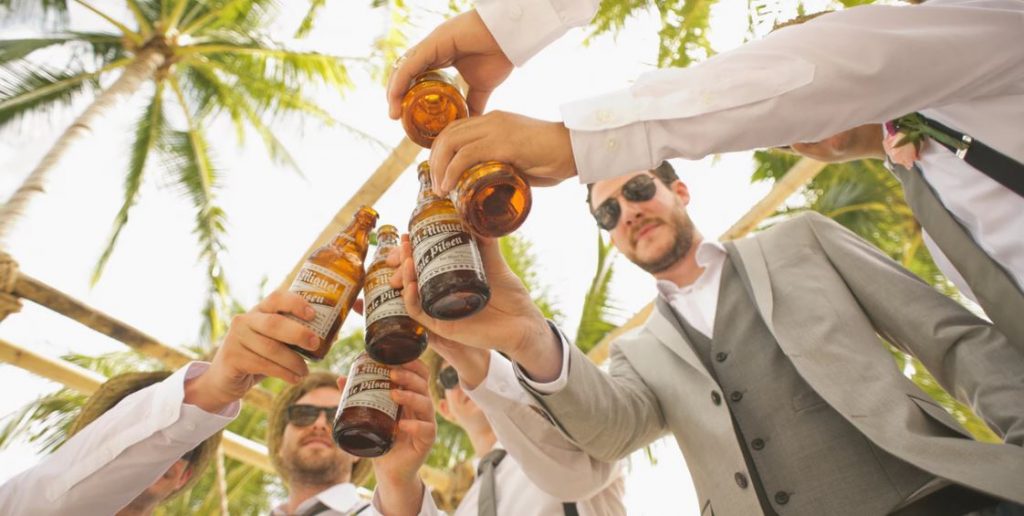 Beer has been a part of early cultures. Sumerians believed in the advice which roughly translates to “fill your belly, day and night make merry” while a prayer to one of their goddesses was used as a method to remember the recipe for beer. In China, people fermented their drinks with rice, which would develop into their eastern version of the drink. Beer eventually spread to Europe around 3000 BC. It was brewed on a domestic scale, but it wasn’t like the beer we drink today. Apart from the fermented grain, there were also some fruits, honey, and even narcotic herbs. However, it was the first to contain hops, a useful ingredient in beer. Around 1516, Germany adopted the Reinheitsgebot (purity law) that regulated the ingredients they used for beer, and that’s why the country is known for its unique beer style.

Beer could be brewed on a domestic scale, but by the Industrial Revolution, it became mostly manufactured – though, during the prohibition in the United States, some people resorted to illegally fermenting their own beer. Since then, however, it has continued to develop into the various types we all know and love.

How Beer Is Made

First, the grains are malted. This means processing the grains through heating, drying, and cracking. Beer manufacturers want to get all the sugar, flavor, and enzymes out of the grain, and breaking down the grain isolates the enzymes and prepares it for the second step.

Next, the grains are steeped in hot water. It releases the enzymes and breaks down the grain to release its sugar. Once that’s done, the water drained is now a sticky liquid filled with a sugar called the wort. It’s boiled for an hour while hops are added to provide bitterness to counter the sweet sugar. It’s also used to preserve beer for a long shelf life.

After an hour, the wort is cooled, filtered, and left to ferment with added yeast for a few weeks. Depending on the beer type, the storage can either be at room temperature or extremely cold temperatures. During this process, yeast consumes the sugar and releases carbon dioxide (CO2) and alcohol, mixing it into the liquid.

After the fermentation, however, the beer is still that flat, uncarbonated texture like when you leave it out for too long. Manufacturers either artificially carbonate it the way you would with soda or put it in its final container while there is still yeast producing CO2. Either way, that’s what makes beer fizz when you open a can or a bottle.

How to Enjoy Beer on a Night Out

What’s the best way to drink on a night out?

There is no sure best way to drink a beer on the night out because that really depends on your preferences. The temperature, the container, and the people you’re with depend on you. But if there’s one thing you should really look out for, it’s the way you pour your drink into a mug or glass – and yes, even if it’s served in a bottle or can.

According to Max Bakker, an AB InBev Educator from Master Cicerone, a certification program for beer sommeliers, the way we pour beer into our glass affects the way we enjoy beer and its effects on our bodies later because of the carbonated air trapped by the beer foam.

As mentioned earlier, the yeast in beer produces CO2. When people pour beer onto their glass, they tend to want to avoid letting the beer fizz and foam up. According to Bakker, without that foam, it’s not the same experience as the beer. A beer that hasn’t foamed up yet means that the CO2 is still trapped inside the liquid. That means when it goes inside your body and hits the acids and other food in your stomach, around 2.5 bottles’ worth of CO2 is entering your stomach. This is what causes that bloating feeling when

If you pour the beer and let it foam up, you’re breaking down the CO2 and preventing most of it from breaking down inside your body. Foam turns into beer once it releases the gas, so don’t worry about drinking less. It also helps you taste the sweetness of the malt and the bitterness of the hops, as well as help you smell the aroma of the foam.

How much beer Is in a pitcher?

Humans are social creatures, and more often than not, it’s more fun to drink beer with friends than on your own. But when you’re out with your friends and find a good deal for buying beer by the pitcher instead of by the bottle, you want to know if one pitcher will be enough for all of you (and sometimes, you really just can’t trust the waiter when he says it’s good for a certain amount of people). So how much beer really is in one pitcher?

Unlike pints, cans, and bottles, measuring beer by the pitcher isn’t the most accurate. Restaurants and bars don’t carry the same pitchers, after all, and there are those carrying the average 32, 60, and 64 ounces (or nearly 1, 1.5, and 2 liters, respectively) sizes. To get a rough estimate about how much your group will need, let’s look at all three.

So, if you see a two-liter pitcher deal for beer, it’s the ideal choice if your group has four to five members. That’s the basic math of it, but we all know you’re know no one’s going to measure equal shares to the last drop. If none of your members are driving, why stop with just one pitcher?

But, should you be putting your beer in a pitcher?

Just because you can put beer in a pitcher doesn’t mean you should, though. If your beer is meant to be drank ice cold, putting it in a serving pitcher and leaving it out on warm temperature could take away what makes beer good as compared to ordering individual beer bottles straight from the freezer.

And before your server gets your beer, make sure you inform them whether you want ice in your beer. If you don’t like your beer watered down, avoid adding ice on it. While there are some beers that taste good in room temperature, if you want a cold beer, make sure the beer and the glass are in the freezer before serving.

What are the different types of beers?

To name a few types, you have pale ales, to stouts, to lagers and many more types around the world. If you don’t like beer, you might like its variant somewhere else. Just to show you how diverse beer is, here are the various types of ales, the most popular kind of beer, and some brands you might want to try. It’s supposed to be more complex, maltier, and more aromatic than lagers (though there are some ales that seem to overlap with lagers in characteristics). Also, some of the beer types under stout, for example, could also qualify under other types such as pale ales.

The Morning After: The Effects of Drinking Beer

Can I drink beer without getting a hangover?

While beer can be fun to drink, like all alcoholic beverages, the hangover that follows may make you regret drinking in the first place. The symptoms of a hangover vary from person to person and factors such as your alcohol intake. According to the Health Services at Columbia University, the hangover threshold for most adults is five drinks or 60 ounces of beer. If you drink this amount in a short period of time and on an empty stomach, you may be more likely to suffer a hangover the morning after. 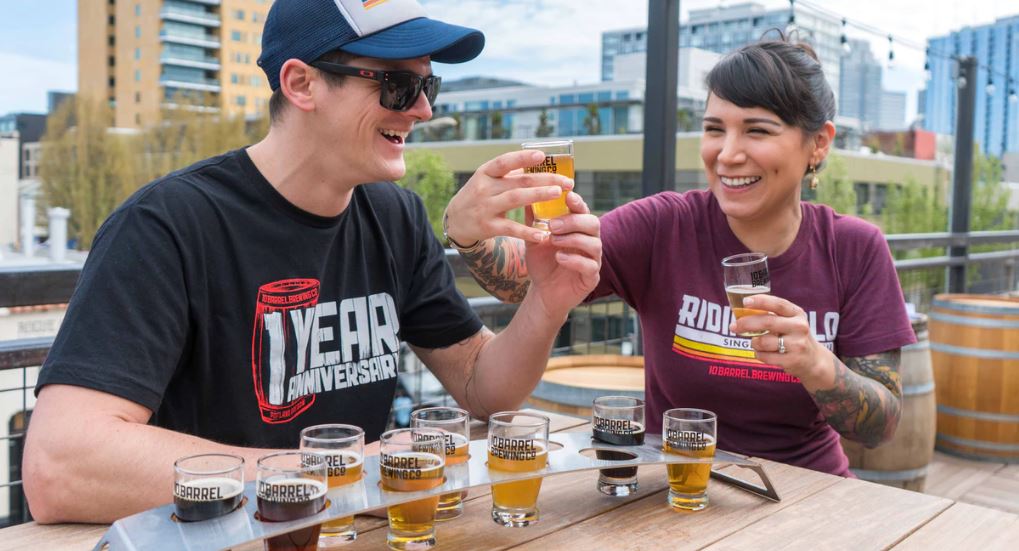 If you’re a female, smaller, or rarely drink, you might want to drink less than 60 ounces because these factors affect your alcohol intolerance. If you’re worried about long-term health, reduce your number of drinks to one drink a day for women and two drinks for men. Drink slowly and, if you’re drinking more than one pint, drink water or juice in between. Don’t drink on an empty stomach because the carbs and fats you eat can break down alcohol before it reaches your bloodstream, making you less inebriated and dehydrated the next day.

The Health Benefits of Beer

When you pick up a can, you might not be thinking about the health benefits it provides. Surprisingly enough, it could provide nutrients and physical health benefits. Many types of beer contain elements such as iron, fluoride, and magnesium.

Silicon and calcium in beer can help with bone health. In a study done by the Journal of the American Medical Association, moderate drinkers were 38 percent less likely to develop osteoporosis than those who didn’t drink.

A 2016 study from the American Heart Association found that, out of 80,000 Chinese adults, moderate beer drinking could slower the decrease in good cholesterol over time. However, these benefits do not come with heavy drinking; too much alcohol could completely cancel out this benefit and cause cardiac problems.

There’s more to beer than just its bitter flavor and temperature. It’s taken centuries to develop beer into what it is today and the way we enjoy it. Now that you know everything you can about beer, maybe you’ll look at your next can a bit differently before cracking it open.