With winter fast approaching, it’s tempting to leave the office for a little R-and-R under a tropical sun, and with this winter predicted one of the coldest of the decade, it’s never too early to plan your next winter escape!

Located on the southwestern coast of Thailand, Krabi is known for its stunning limestone cliffs, thick mangrove forests, and hundreds of islands to explore. The place is perfect for both families and honeymooners, with resorts ranging from the basic to the luxurious.

Traveling to Krabi in December means enjoying relatively “cool” average temperatures of 86F and mostly clear skies. Yes, 86F is cool for the tropics! While you’re there, try to visit some of the offshore islands like Ko Poda, with its crystal-clear waters, Ko Lanta Yai and its private beaches, as well as Phi Phi Islands for some snorkeling. If you’re looking for something more adventurous, try out Railay Beach for some of the best rock climbing this side of the equator!

Despite what people think, Rio De Janeiro is actually NOT the capital of Brazil (It’s actually Brasilia), but that doesn’t make Rio one of the most vibrant, energetic, and colorful city in the entire world.

Rio De Janeiro, however, is not for the faint of heart: it is an active city filled with constant party energy, with its famous Carnival aura lingering in the city long after it finishes. There is music everywhere in the city; specifically, bossa nova and samba, which makes sense considering that this is where those musical styles were borne.

As it is with other tropical countries, Rio De Janeiro’s weather during December hovers around 68 to 86F, making it a perfect place to travel to during the winter months. Don’t be shy about hitting the streets with your bikini: Rio is a party city and the fewer clothes, the better!

But outside the nightlife (and sometimes, day parties), Rio De Janeiro has tons of cultural and historical sites for you to explore: check out the famous Christ the Redeemer, or climb up Sugarloaf Mountain to get unparalleled views of the city and the Atlantic ocean. Or, relax at the famous Copacabana and Ipanema beaches and relive your 60’s celebrity lifestyle fantasies!

Located near the southernmost tip of Africa (and is in fact, the continent’s southernmost metropolis), Cape Town is a historic city that’s often overlooked in most travel itineraries, which is surprising, considering Cape Town’s exciting nightlife, gorgeous white sand beaches, historic sites, and under-appreciated wine culture. It’s also the diamond capital of the world, so if you feel like splurging a little for a ring, this is the place to do it.

Visit Table Mountain to get gorgeous views of the city and the other side of the Atlantic, the Castle of Good Hope, Robben Island, or go for a boozy adventure and do a wine tasting tour that takes you around the best wineries the city has to offer.

Because of its location in the southern hemisphere, Cape Town is one of the best places to travel to during December, which are the summer months for the country. Average temperatures range around 86F, with the occasional rainstorms, so plan your beach trips carefully!

Southeast Asia is a melting pot of different cultures from not just the region but all around the world, and few places in that area summarize that more than Singapore. It’s a hyper-modern city that has it all: luxury hotels, backpacker hostels, 5-star restaurants, the best street food in the world, historical sites, theme parks, and many, many, more.

Singapore is one of the most expensive cities in the world, but it’s also, paradoxically, one of the most affordable cities to travel to. Traveling to Singapore in December means Christmas shopping deals in the cities in various malls. If you get tired from all the visits to stores, try out Singapore’s world-famous hawker centers: basically food parks that offer some of the best cuisines from all across Southeast Asia (and some local favorites like Cereal Prawns and Iced Milo).

Noted for its luxurious resorts, romantic beaches, and private islands, the Maldives is a honeymooner’s paradise. This small South Asian country just off the coast of Sri Lanka boasts of more than a thousand coral islands and 26 ring-shaped atolls, giving travelers the perfect secluded getaway.

Traveling in December to the Maldives, however, can be tricky: the temperature hovers in the high 80’s, but it’s also the rainy season in the islands. Plan your beach trips accordingly, or use it as an excuse to cuddle with your partner in your luxury accommodations. Win-win for all!

Like Cape Town, the city of Sydney in Australia also experiences its summer months during the northern hemisphere’s winter, so it’s the perfect time to travel to in December. It’s not uncommon for Australians to celebrate the Christmas season with an outdoor BBQ, which is definitely something us Americans should try to take part in at least once. I mean, what’s not to like: Aussie beer, shrimp on the barbie, sun, sand, and friends? It’s the perfect, albeit very different, kind of Christmas!

While you’re there, try to visit the Sydney Opera House, a landmark in modern architecture and one of the defining sites of the city’s harbor. Cross the famous Sydney Harbor Bridge on your way to Taronga Zoo to see some rare and exotic animals, or just relax in the world-famous Bondi Beach.

Although not as warm as its tropical counterparts, the Spanish capital makes up for its chilly weather with a lot of festive energy and hearty food. Madrid is one of the best places to travel to in December because of the sheer number of festivals and fiestas happening during the month, from Dia de Los Santos Innocentes to Dia Navidad.

Madrid is one of the oldest cities in Europe, so don’t forget to check out their myriad collection of ancient palaces, city blocks lined with cobblestones dating back to the 15th century, the famous Plaza Mayor, and of course, the Museo Nacional Del Prado.

It’s also one of the best places to travel to in December, thanks to its position in the southern hemisphere that lets it enjoy summer during our winter. Try to visit the Teatro Colón, the city’s main opera house and one of the best opera houses in the world. Or, for a slightly more morbid (albeit beautiful) sight, visit the Recoleta Cemetery and marvel at its intricate collection of tombstones and mausoleums.

No list of the best places to travel to in December is complete without mentioning Goa, India. The cities biggest festival, the Sunburn Festival, happens in December, making this the place to go for people looking for amazing nightlife. Visit Calangute Beach, also known as the Queen of Beaches for its breathtaking, panoramic views, fine sand beaches, and amazingly clear waters.

If you’re looking for culture, check out the Aguada Fort and the Basilica of Bom Jesus to experience some of Goa’s unique history.

Also called the Teardrop Island because of its shape, Siargao Island is an absolute must for people looking to enjoy some sand and surf, literally: Siargao is a surfer destination, thanks to its high waves and crystal clear waters. At over 400 kilometers long, Siargao has different kinds of beaches for every different kind of traveler, whether it’s water sports enthusiasts, family vacationers, or honeymooners.

Try to visit the other islands near and around Siargao for more secluded fun, like Guyam Island, Daku Island, and Dedon Island. If you’re traveling to Siargao in December, take note that the rainy season is at its peak in the latter half of the month. This means less sunshine, but better waves, so if you’re into surfing, this is the best time to go.

It sounds like a cliché, but Bali, Indonesia, is less of a destination and more of a state of mind. Bali is the perfect place to travel to during December, thanks to its absolutely clear skies, balmy 86F weather, blue waters, and amazing culture, all of which turn a simple vacation into a spiritual experience. 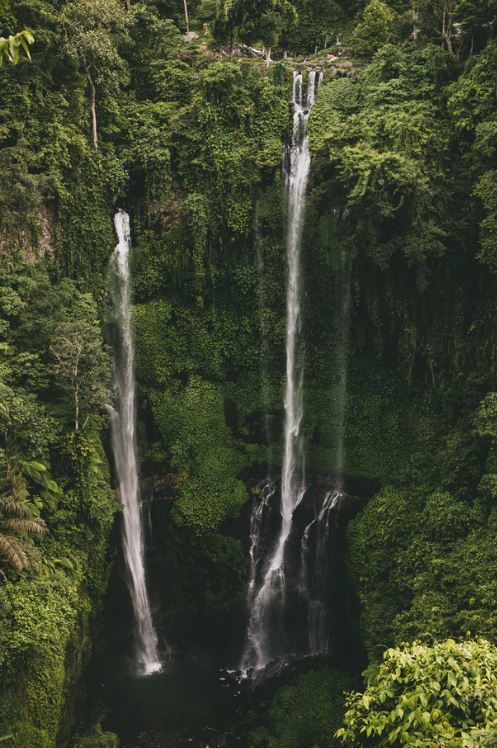 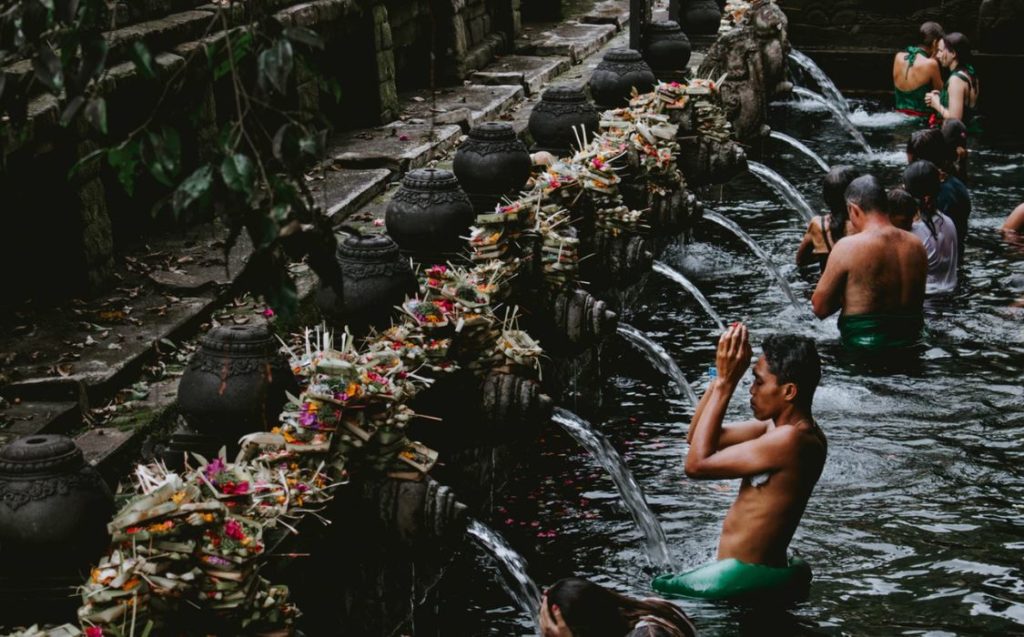 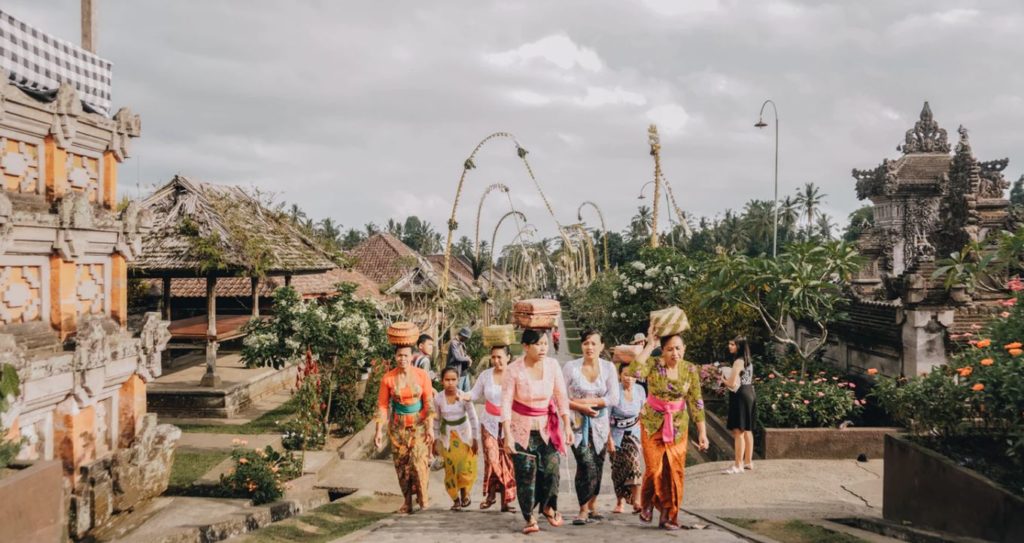 And Bali is not short on spirituality: it’s a holy site for the island’s Buddhist population and is chock-full of amazing temples and secluded beaches. This is a honeymooner’s dream, thanks to its luxurious resorts, romantic villas, and thick canopies of forests dotting the island.